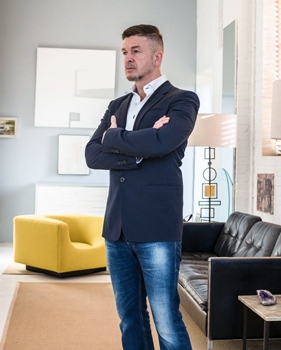 Gareth Devonald Smith studied as a textile designer – a training which has allowed him to move between disciplines. Having worked for the interior designer Mary Fox Linton in the 80s, he began working as an artist and designer, gravitating towards metalwork and eventually producing the sculptural lighting and furniture which he creates today. He is currently designing a new collection for Porta Romana to be launched under his name, and is now producing his own collection in the UK. Fabricated from a mixture of steel and bronze, this includes signature pieces such as the Samurai console table, the twist table lamp and the Sun and Moon chandelier, the only classical piece in the portfolio and a work that shows Gareth’s versatility and understanding of proportion and detail.

On board mega yachts and luxury liners, in the private homes of the super rich, and in the world’s most luxurious hotels and fashionable restaurants – you will find the work of Gareth Devonald Smith. His beautifully tailored and dynamic light sculptures and furniture are directly influenced by his work as a sculptor, and the entire collection, including signature pieces such as Samurai and Satellite, are made in London by highly skilled craftsmen, with final detailing by GDS.